Facility which will also house the San Antonio Museum of Science and Technology, A co-working space, food hall and bar, and a LAN Gaming Center.

SAN ANTONIO — Next week is the official opening of Tech Port Center + Arena: an arena and concert venue designed and built specifically with E-sports in mind. It is also being hailed as a way to bring competitive video-gaming to the masses.

Workers are busy putting the final touches on the brand-new tech port center and arena on San Antonio’s Southwest side.

“Getting ready for our first show on May 2, the Smashing Pumpkins in our first gaming event May 6, with the Overwatch: Battle for Texas,” said Jim Perschbach, CEO of Tech Port San Antonio.

$70 million have been poured into this 130,000 square foot facility which will also house the San Antonio Museum of Science and Technology, A co-working space, food hall and bar, and a LAN Gaming Center.

Perschbach is calling it the highest-tech arena anywhere in the country.

“Those things hanging from the ceiling?” he said, pointing to the other end of the arena. “Those are Tesla coils.”

Once it is finished, several tesla-coils will be mounted up above the arena. They will be able to provide backup-power, but the sounds coming from the currents the coils create will also allow them to function as speakers. Think of it like lightning but the thunder sounds like music.

And we believe that is going to be the largest concentration of musical Tesla coils anywhere in the world,” Perschbach said. “They will shoot sparks about 60 feet out. So, it’s the most metal accoutrement you’re ever going to have to a concert.” 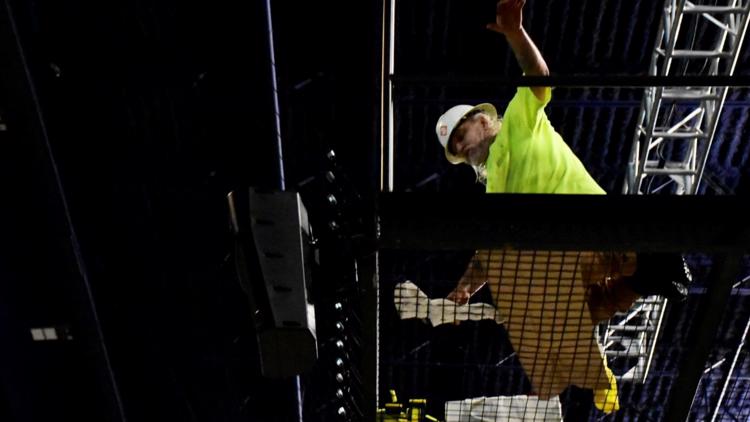 The center will hold its inaugural event next Tuesday when San Antonio Mayor Ron Nirenberg gives his State of the City Address.

“This is really kind of a coming out party for the tech community in San Antonio, in many ways,” Nirenberg said.

“We’re really excited the fact that this building can connect all these different spaces from the arena to the restaurant to the bar.” said Eric Blockie, General Manager for the Tech Port Center and Arena.

On top of the 3,300-seat arena built for e-sports, he was excited to show off the LAN gaming center.

Equipped with 60 high-performance, liquid-cooled gaming computers, the LAN center can be rented out for events, but most days it will be open to the public. Locals without the means to build an advanced gaming computer of their own, will have the chance to compete on a level playing field.

“So we have the local community be able to come here compete at the same level as anybody else in San Antonio, the United States, or the world,” Blockie said.

The technology built into the Tech Port Center and Arena will also allow for live broadcasts from anywhere in the building. Everything can be routed through the control room they have located in the San Antonio Museum of Science and Technology.

Blockie said he expects the center to be a major economic boon for San Antonio and the Southwest side.